Changing the Shapes of your Layouts

If you refer to my previous topic titled "Newspapers or Magazines in your Layouts" in the tips and tricks section, I've promised myself to do a layout by using newspapers as background enhancer. Therefore, I've included this technique in my latest layout, named "The Cut". 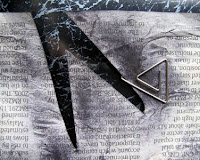 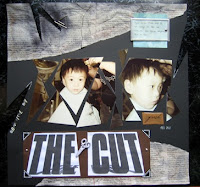 I've used two strips of newspapers and crunched them up and later inked them to get the distressed looked as above. By watching Ryan's hair being cut, I just want to create a page that looked liked his hair being cut. Therefore, I've thought of the name "The Cut".
Who says that all layouts need to be in square shapes? I've read it somewhere in the magazines that there are ideas of doing circle shaped layout. However, I wanted something more different for this layout.
Using the inspiration, I've snipped off some parts of the square shape layout to further enhanced the looked of "cuts". By doing so, I've made this piece a one of a kind. I've even enhanced the colour around the cuts to show them. Using some small journalling along the cuts will also do the trick. I guess by far, this is the most daring photographs cutting technique that I've tried. So try to do something different with your future layouts and change their shapes.
Posted by Irene Tan aka Scrapperlicious at 9:44 PM