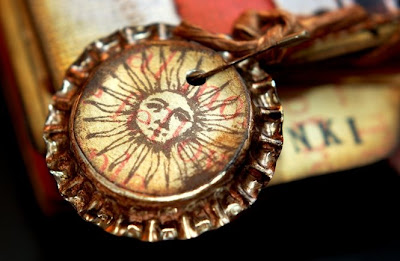 Do you own any of the bottle caps that were once everybody are excited about? I actually do received quite a few emails asking me for ideas using them. I have a great friend who actually sent a few of these bottle caps to me. I've once used it to embellish on a flower but I guess that's not enough to satisfy the requests...lol!
Therefore, in my recent project, I've actually distressed a bottle cap and used it as an embellishment. Simply use some alcohol ink and a brush to paint over the bottle cap and let it dry. I've later, use a small hammer to create some dent to it and let it open up a bit. You can add details by stamping on it or on card stock and later cut and paste on it. You could also add some vintage images or even a flower or two on it. Then, punch a hole on it and attach it to your project.
Hope this tip would give you all more ideas into using those bottle caps.

Posted by Irene Tan aka Scrapperlicious at 10:42 AM

I remember collecting Coke and other softdrink bottle caps as a kid. It was a fasinating thing then. I have none with me right now. But what a great idea Irene. The stamp you have used on it a perfect one. Awesome. I will look out for the bottle caps hehehe! at;east to use one or two on my layout.Lol!!

Hello there from Germany!
Thank you for this great idea - I will try it soon!

Cool!! Now I can pull my stash out and use them in an awesome way!! Thanks Irene!!

Ohhh you are so smart & creative!! I love your inspiration! thanks so much Irene!!! :D

i LOVE this idea of altering bottlecaps!!! gonna try and make some!! youre always so creative!!!

That's a cool idea Irene,I will try it on one of my pages. Thanks for the idea...

OOH I love altered Bottle caps! Glad to see someone using them!!
PS: I flatten mine but using my Sizzix Machine and the adapter. Works like a champ. :)

This looks amazing Irene.... Love it!