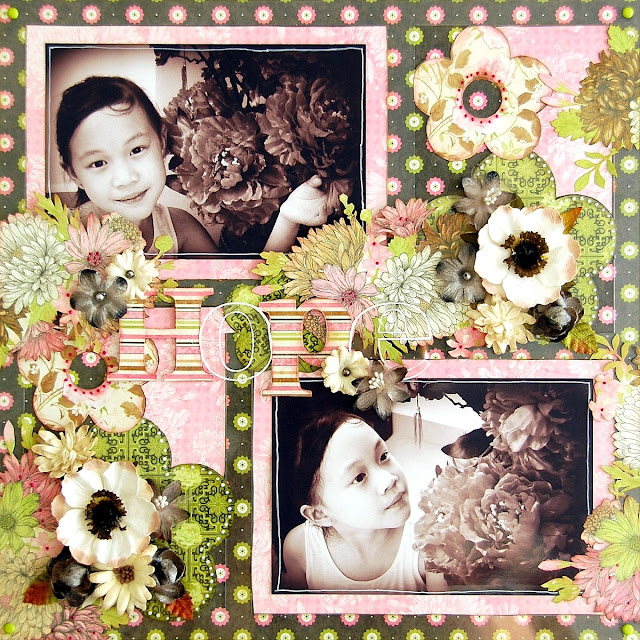 Good morning friends! Have you seen Clear Scraps acrylic layout frames? If not, you should try creating using it. It is so much fun and make creating a layout so easy. For today's layout, I've used Clear Scraps flowers acrylic layout. These acrylic layout is kind of an overlay. You can leave it see through or add colors to it using pattern papers or mixed media medium.

Below are some close-up pictures. 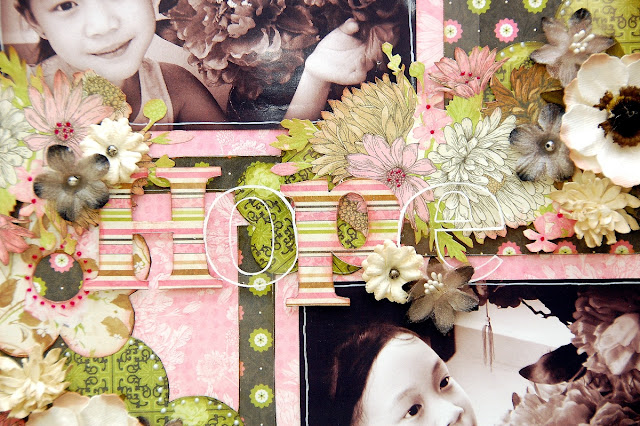 I used an acrylic "Hope" expression by Clear Scraps as the title of this layout. I've used some pattern papers to decorate some of the alphabets and outline the rest with permanent marker. 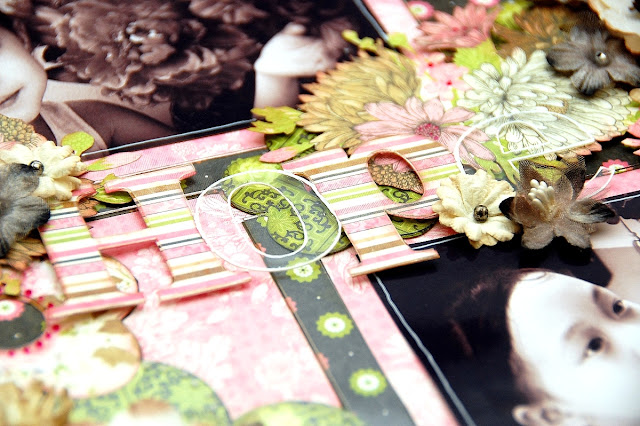 For more dimension, I've added some paper flowers on it. Lastly, to make the acrylic layout looks more natural on this layout, I've cut out some flowers from the pattern papers to decorate the layout. 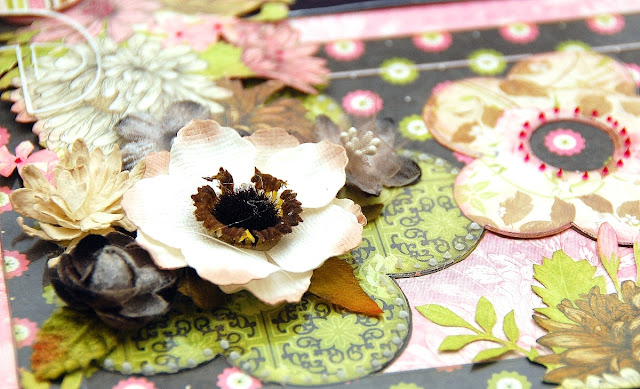 Below is a picture of the bare acrylic layout frame. 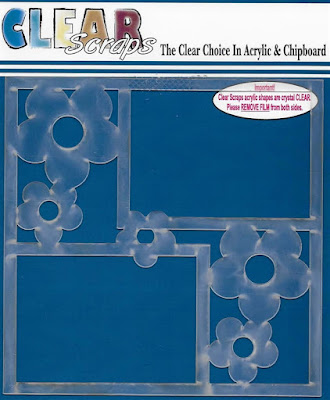 Thank you so much for dropping by and see you all again soon!

Praying For You Card 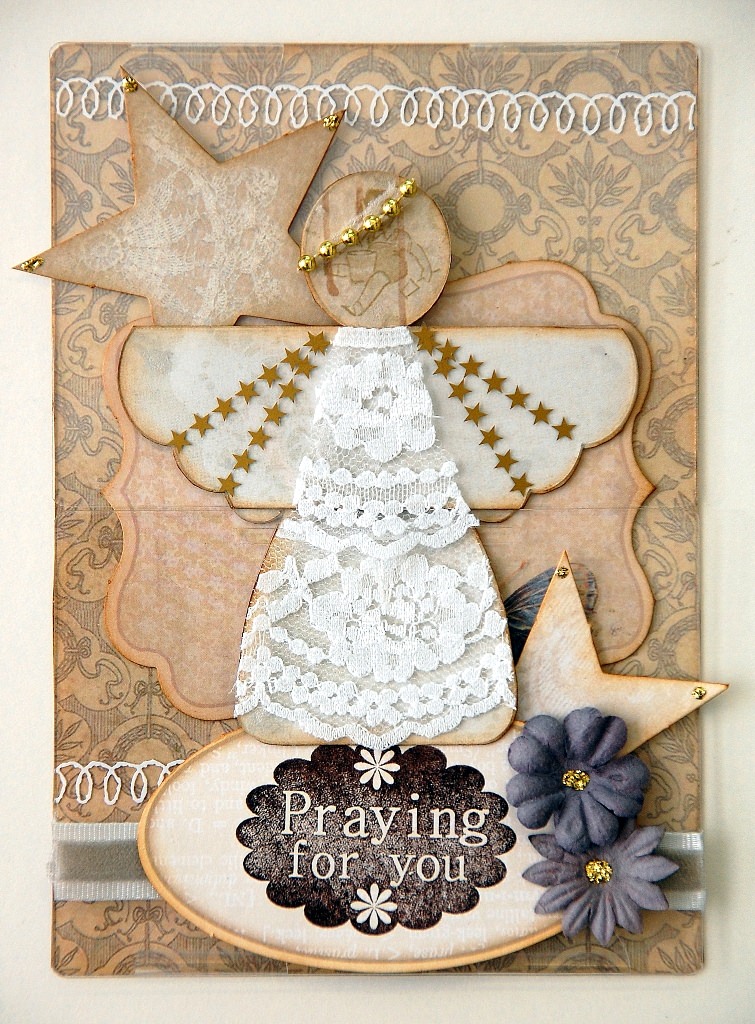 Hello there! It has been a roller coaster week for me and I really need a good rest during coming weekend. How has is your week? I hope you all have a great creative week. For today's post, I would like to share with you all an acrylic card which I've created some time ago using Clear Scraps acrylic angel card.

I've decorated the card with some pattern papers and flowers. For the angel, I've used some lace to create the dress and some beads for detail. I've also added some acrylic stars on the card. To add more sparkle to it, I've used some stickles and rub-ons.

Below is a picture of how the card is, when open up.

I hope the sentiment on this card would help you all go through any difficult situations. Have a creative weekend and see you all again soon! 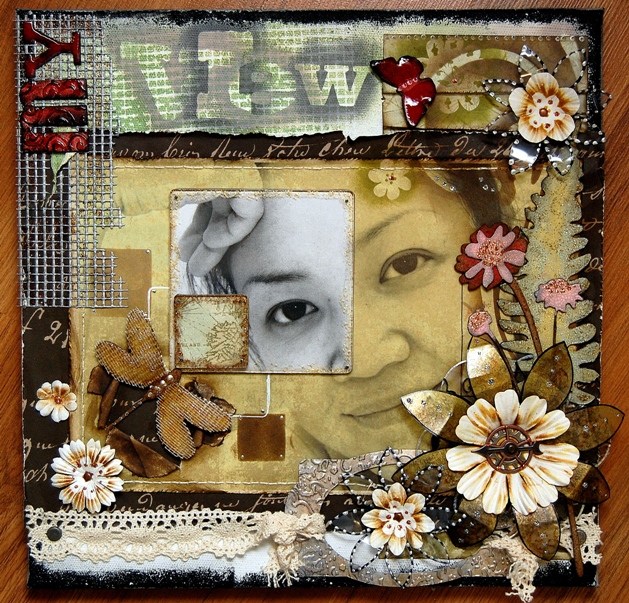 Hello friends! For today's post, I would like to share this altered canvas which I've created long time ago using tons of products of by Tim Holtz. I've used products by Tim Holtz idea-ology and Ranger Inks Besides that, I've also used an acrylic frame and some acrylic sheets by Clear Scraps.

Below are some details on this canvas.

In the below picture, I've painted some grunge board fern and flowers with crackle paints and detail it with distressed stickles and ink. 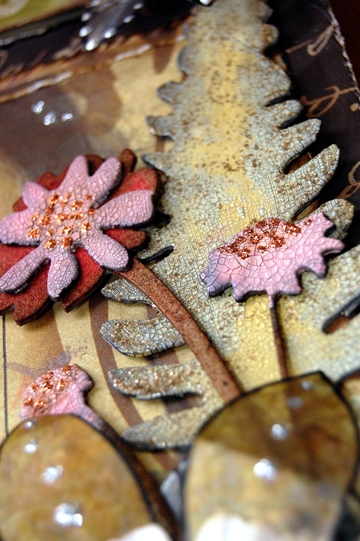 I've used an acrylic sheet to create this flower. I've cut out the flower and outlined it with permanent marker. To layer it, I've used a paper flower which I've masked another smaller flower in it. On the edges of the canvas, I've used some distress embossing powder to highlight it. 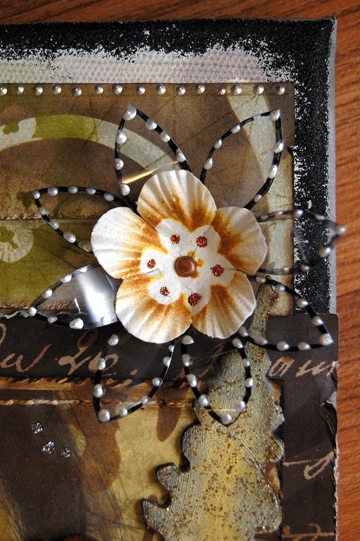 On the grunge board dragonfly below, I've added ink and magic mesh on it. Later, I've used some glossy accents to seal it and use some liquid pearls to detail it. 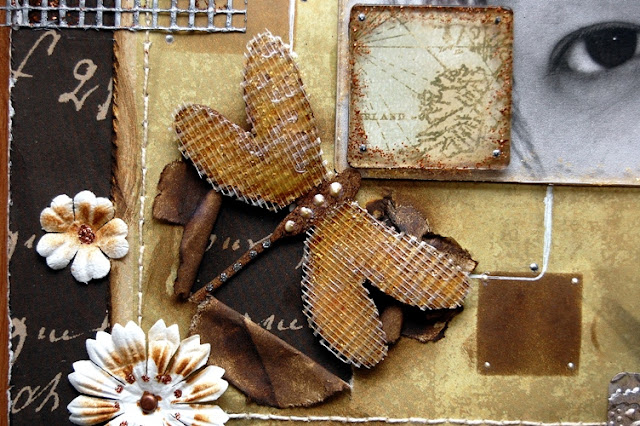 I really love the metal embellishment by Tim Holtz idea-ology series. I've used some some them on the flower below to create the grungy and steampunk effect. The outer layer of the flower is made of acrylic sheets which have been inked using alcohol ink. 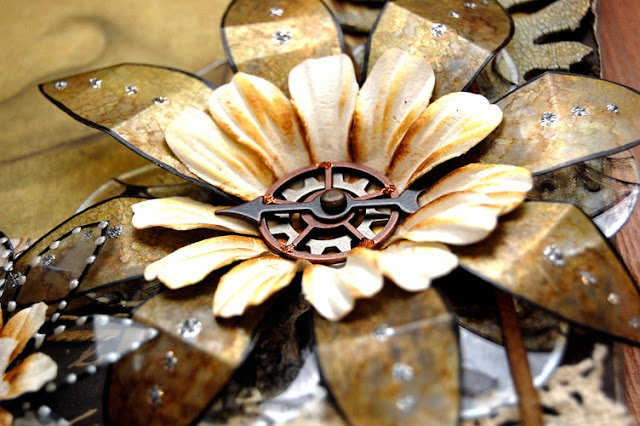 To create some textures and details on the acrylic frame, I've embossed it and inked it with alcohol ink. 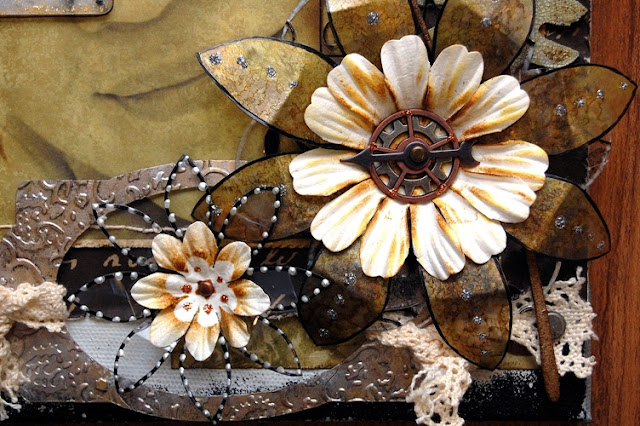 I've embossed the alphabet below with some embossing folder and later inked it with distress ink. To further enhance it and seal it, I've used some glossy accents. 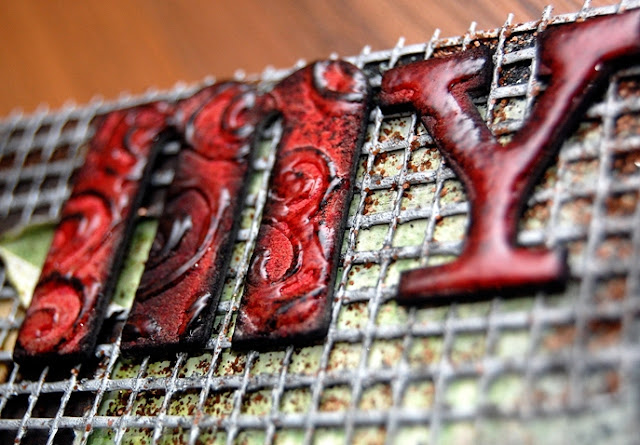 Hope you all like today's canvas. Try some of the techniques which I've used on the altered canvas in your recent projects. Have fun and see you all again soon! 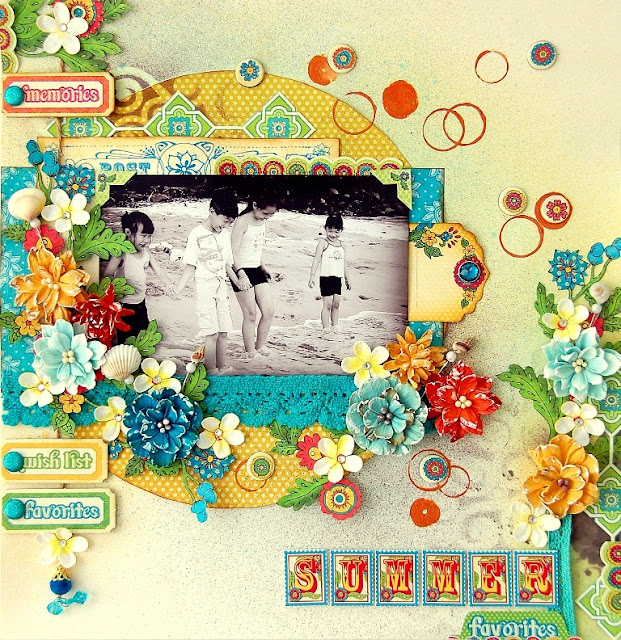 Hello friends! I'm so sorry for missing a post last week. I've been super busy and there are just so much to do till I've forgotten to schedule a post here. Between things around the house and having two kids who are about to take exams, I'm trying my best to juggle each day.

Anyway, for today's post, I would like to share with you all a Summer themed layout with tons of warm colors. I've used pattern papers by Graphic 45 and flowers by Petaloo to create this layout.

Below are some closer look on this layout. 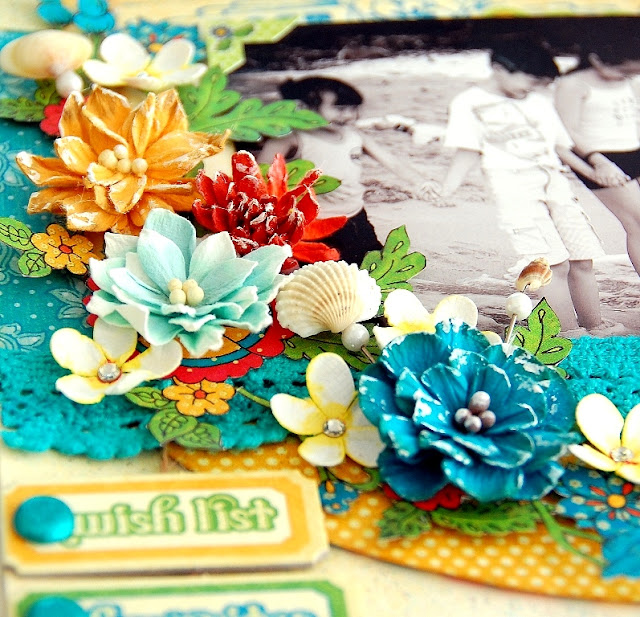 To make the layout colorful and warm, I've added different colors of paper flowers around the layout. These flowers and lace gives the layout so much dimension and textures. 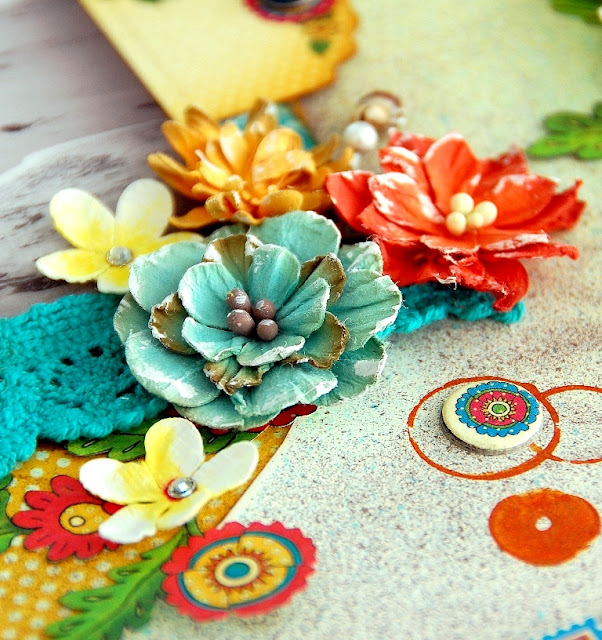 To tone down the colors a bit and blend with the beach theme of the layout, I've brushed on the flowers with some white paint.

I also use some bottle caps to create some interesting circle design on the background of this layout.

Hope to see you all again soon!