Actually this idea was inspired by my son, Ryan. While I am trying to figure out, how am I suppose to make the title looked interesting, Ryan came to me and asked me whether he can keep the boxes of his recently received toys on his birthday. Actually, I was about to throw them away. He picked up a box which had pictures of soldiers on it and said he would liked to keep that. Therefore, I've to come up with an idea for him to let that box go. I've told him that I would used that box in one of his layout so he can looked at it whenever he wants. 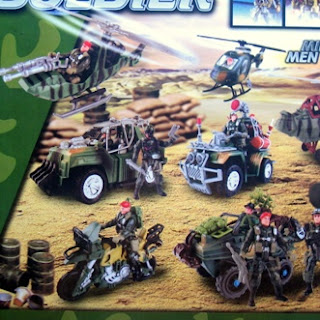 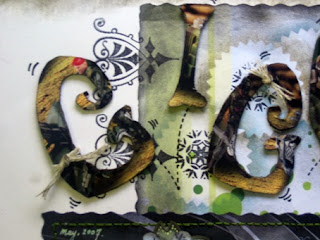 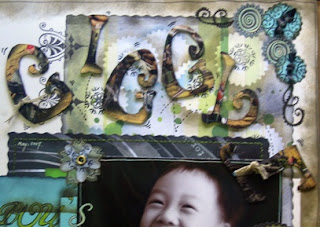 Then, I've inked the edges of the letters and tied some threads to it for more interest. To make the title looked more fun and interesting, I've arranged it as if the letters are bouncing and giggling away and the letter "E" had fell off from the group.
Posted by Irene Tan aka Scrapperlicious at 8:55 PM

beautifully done. I am interested in learning how you cut out your letters in "giggle" I am so inspired by your techniques. Thank you for sharing!!

To answer your question, I've actually hand drawn the letters on the toy box and then using a hard duty scissors to cut them out. It can be a little tricky when it comes to the round edges but just do it with a little patience and you will definitely love the outcome. Thanks for asking!

It just doesn't get any better than this!! Each post I come to on here is just absolutely AMAZING!! WOW! LOVE them all. They are definately very interesting!! Great idea to use the picture box for the letters--you're soo awesome! :)