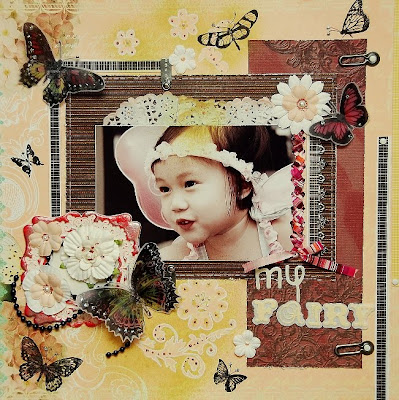 This is my second layout using Swirlydoos April kit, "Park Avenue". In this layout, I've added some paper doiley to create a more feminine look to the layout.
Here are the details. 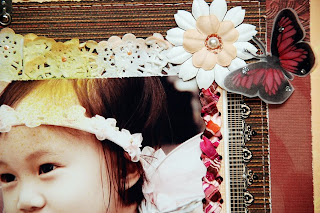 I've ink the edges of some paper doiley and added it behind the top edges of the photograph. 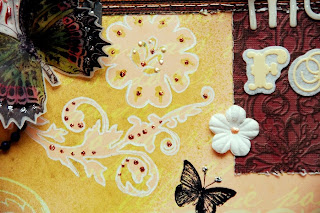 I've used some mini florets masks by Tim Holtz idea-ology to mask some flowers and flourishes on the top and bottom of the layout. Later, I've detailed it with Stickles and liquid pearls. 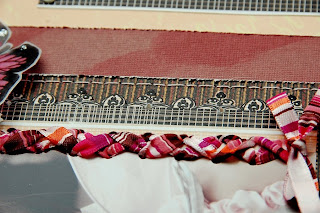 I've cut out a border from the pattern paper and attach it to the right of the photograph. I've dress it up with liquid pearls. 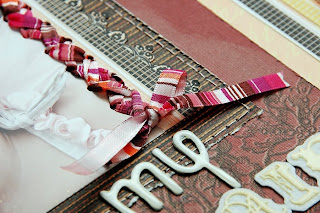 I've punched some holes on the right of the photograph and use a ribbon to do a strip of lacing on it. 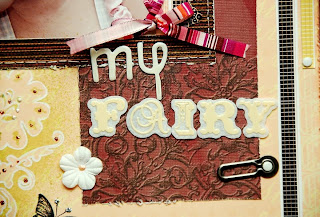 I've used some chipboard alphas and the alphas sticker to form the title. I've also added some photo holders on the right of the layout. 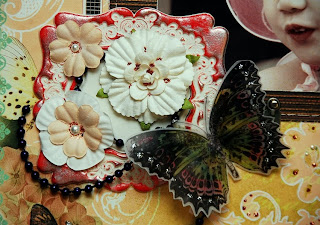 I've inked the vinyl frame (included in the kit) with alcohol ink and added some flowers on it. I've also stamped some butterflies using black solvent ink onto vellums and later colour it with Copic markers. I've also detailed it with Stickles. For a more interesting effect, I've also stamped some butterflies directly onto the layout. The pop up butterflies look as if it has come alive and flying off the layout...LOL! After all, it's a layout about fairy magic, right?
Hope you all enjoyed today's technique explanation. Try it out and have fun!

This one is so cute. I would love to give something like this as a gift! So personalized!
dining table

THis is amazing Irene

Irene, I wish I had your talent. I just love your work.

This is really lovely Irene. You are such a source of inspiration for me.

Gorgeous, LO!! And your lil fairy is adorable!!

I Scrap So All Moments Are Remembered!

Wow...what a great LO and what a cute picture. Hug, Soraya x

This is gorgeous. Really beautifully done. Love all the little details.
Your fairy is absolutely adorable :-)
Gaby xo

Lovely photo.
Like the inked doily and masking the flowers!